You may recall my post from April 1st where I first showed my painting "Windows" and described how colors can impact how we perceive the emotions conveyed by an image. The original post is here. I've repeated the image of "Windows" here and the numbering scheme used to collect responses.

Here are the questions I asked in the survey along with the answers I received from about 20 people. Not statistically significant but enough to look for trends. The number in parentheses preceding and answer is the number of people who gave that answer.

Which image feels
Below are the color theories I researched and the emotions they said are associated with each color. Let's see how the answers to the survey relate.

Serious and Intelligence - Per Color Wheel/Color Theory bright blue & indigo are closely associated. However yellow is also associated with intellect and Kadinsky says orange correlates with being serious. This question received a large variety of answers with  L3, R2 & R5 receiving 4 or 5 votes. L3 matches the blue theory, R2 corresponds with the yellow and orange concepts. I suspect R5 was influenced more by the expression than the color. Two of the other answers given also had a lot of yellow. The other two answer given were more pink/red which can be associated with strength and determination which may be associated with being serious.

Joyous and full of Wisdom - Received 13 votes for L1. Per color theory yellow is associated with joy and happiness while gold adds the wisdom component, so the L1 answer definitely matches color theory. R4 also received one vote and this image also have a yellow/golden appearance. R3 received 5 votes; it is significantly red which matches Kadinsky's association of red with joy. Violet and bright blue can also be associated with wisdom, but none of the images have a lot of violet and the expression in L3 is not happy so that is likely why it was not selected.

Self-sufficient, Alive and Confident are attributes of red according to Kadinsky. Independence is similar in concept and is associated with violet according to color theory. This question received a wide variety of answers with R4 and R5 each receiving 5 votes.  Although several images are very pink, R5 does have the strongest red. The eyes in R4 are very violet in color and may have resulted in the large number of votes for this image. L3 was the next most voted answer with 3 votes and per color theory bright blue is associated with confidence.

Peaceful with Inner Strength - According to Kadinsky these are most associated with bright blue and green. Color theory associates blue with tranquility and calmness and specifically olive green with peace.  L4 received the most votes (4) has a lot of olive green accenting the eyes and nose. It is interesting to note that although L3 is all blue, it received no votes, but again the expression is more intense and does not communicate peacefulness. L2 received 3 votes even though it has neither blue or green. I'm guessing the expression has more to do with why this image received these votes.

Sadness was addressed by Kadinsky, who said violet invokes sadness. It was interesting that L3 received five votes, the highest number of votes. Color theory cannot justify that response as none of the emotions associate with blue relate to sadness. L2 received 4 votes and R1 received 3 votes. They both have some violet near the eyes and in the shadows by the nose.  R5 received 1 vote and has pale lavendar in the shadows around the eyes. Lastly R4, which has violet eyes and a violet shadow by the nose also received one vote.  L4 received one vote even though it has no violet. L4 does have brown, which corresponds to dull and inhibited which perhaps was seen as sadess. It is interesting to me that L1, R2 and R3 contain no violet and received no votes. So although violet was not a prevalent color in any of the images, it was present to small amounts and did seem to track with many of the answers provided.

It's interesting to me that in many cases the votes could be traced to the emotion suggested by either Kadinsky or color theory. However, the only emotion that was strongly correlated was "Joyous and full of Wisdom", where nearly 70% selected L1 and 26% selected R4, where a golden glow was prevalent in both images.

Many thanks to those who participated by answering my survey.*

* For those of you wondering why the "Most Tired" question, included in my previous blog, is not discussed here, that is because I brought the survey questions with me to two receptions where the painting was on exhibit and due to my oversight I left off the Tired question. As a result there simply weren't enough respondents who answered that question to include it in the results.

Copyright April M Rimpo 2015 All Rights Reserved. You may share my work with attribution and a link to this source site, but all other uses are prohibited.

What a Difference Lighting Can Make

Ever notice how you feel better when you are getting a lot of sunlight? I don't mean necessarily sunbathing in full sun, just being in a space where you get a lot of indirect light from outdoors can do the trick.

Sometimes you hear about the "perfect" North Light for a studio. The goal of Northern lighting is to have fairly consistent light throughout the day without direct light causing glare on your canvas or paper. Most people aren't lucky enough to have a studio in the Northern Hemisphere that is perfectly positioned to have Northern Light.

However, you can achieve great consistent light with the same light spectrum as the sun using the proper light bulbs. Touchstone Gallery changed out its lighting this year and the result has been amazing.  The artwork seems to really jump off the walls because the lighting is so great. This change at the gallery inspired me to research and obtain some new lights for my studio.

Since we weren't going to install new fixture I have two recessed lights that are located a little be behind my slanted painting table. Perhaps a third light just in front of the table might have been nice, but there is also a sliding door to the left of my table that also lets in some pretty nice light around mid-day to late afternoon.

In addition to have two fixtures above my painting table, I also have two over a table where I varnish my paintings.  These new lights have made it so much easier to see whether I have a good even coat of varnish on my piece.

These bulbs are available in a package of four (4) for just under $48.00. Being LED bulbs their lifetime should be excellent.

I found with the new studio lights that I could set my camera light source for direct sun and photograph the work under my new studio lights. I have put away my light stands and now have that space back in my studio. I think color in my images of my paintings are actually a little truer, requiring less editing in a photo editor to adjust the colors to match the painting. A nice side benefit I hadn't anticipated.

For those wanting to understand more about lighting I found this website useful http://stereopsis.com/fullspectrum/ .

Interested in learning more about April's art inspirations, tips about her painting process, or art business tidbits? Want to know when her art is in exhibits? Consider joining her friends and collectors by signing up for her twice-monthly email.
Copyright April M Rimpo 2016 All Rights Reserved. You may share my work with attribution, but all other uses are prohibited.
at 5/18/2016 2 comments:

I probably shouldn't admit to favorites when I talk about my paintings, but Morning in NYC is definitely one of my favorites.  Thus my decision to have this my second featured art on display at RE/MAX Advantage Realty in Baltimore.

I started drawing this painting on tracing paper when visiting my mother's home for a week long visit. I got up early to draw until she got up. That would give me a couple hours to make progress, which is about how long I could focus on all those linear lines and details of the city before I needed a break.

After I returned home to my studio, I transferred the image to watercolor paper and created the painting. I used the same basic colors of the city but brightened them just slightly to emphasize the beautiful peace of the morning light.

As you can see in the image above, giclee prints can be purchased in a variety of types. It is the large canvas print on display at RE/MAX Advantage. I offer prints of my artwork on watercolor paper and gallery wrapped canvas. Most of my gallery wrapped canvas prints have the image wrap around the edge of the frame and some have a solid colored edge. The image above includes (from left to right), a small (10" tall) print on watercolor, the original watercolor framed with a white mat, a larger giclee print on canvas 24" X 16" with a depth of  1.5", and a small giclee print on canvas 18" X 8 X 0.75" depth.

If you'd like to see the print in person and live near Baltimore feel free to go to RE/MAX Advantage and let them know you are there to see my artwork. I can also meet you there. Contact me to see if we can arrange a good date to meet.

Prints in the sizes shown are available. If you'd prefer a different size, contact me with the size and I will provide a quote.

The original is also available:

When considering a print of an original painting you can decide on the size and type of print that best suits your space. Because I get high resolution digital scans of my paintings, you can enlarge the image up to three times without degradation.  This amount of enlargement should allow you to fill a very large space.  Prints on watercolor paper need to be framed under glass with a mat that separates the print from touching the glass.  Frames on the canvas prints are optional.

Copyright April M Rimpo 2016 All Rights Reserved. You may share my work with attribution and a link to this source site, but all other uses are prohibited.
at 5/11/2016 2 comments: 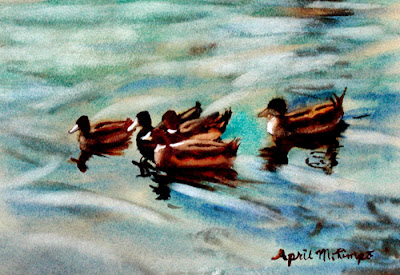