Delivery Trike is part of my bicycle series, although in this case an adult size tricycle.  I had seen this trike at a park at least 15 years ago and immediately thought there would someday be a painting. I’m not sure if it is something about the geometric contrast between the wheels and spokes with the overgrown plants behind the trike, or the contrast with the bright linear rectangles of the crates on the back platform.  Regardless of the original attraction I think it is both of these characteristics that continued to summon me to the original photograph.
I remember being amused by the thought of a large delivery tricycle and thought others would equally be amused.  It felt like a throw-back to another era and  the overgrown plants behind the trike told me it had not been used for a long time.  It now felt more like a decoration, but I believe at one time it was a very useful vehicle. I hope my rendition will make people think back to earlier times when our ingenuity brought about vehicles like this to help us do our work and the elegance of such solutions.

Other bicycle paintings can be seen in these blog posts:

Prints are available in my online shop.

One other bicycle painting that I have not described in a blog is shown below.  Ready to Roll was a playful piece where geometric squares and triangles were played against the circular wheels of the bike and curve of the handle bars. 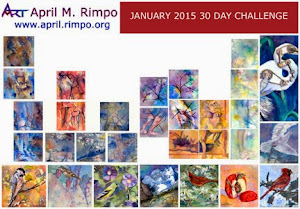