Portraits and Profiles: Inspiration in my Life Exhibition

Pie Anyone? is my entry in this exhibit.I chuckle a little bit each time I look at my painting of my mother inspired by a family photograph of her in her late teens or early twenties.  The chuckle is because when my mother first saw this painting she laughed and said, "That must have been a pie my mother baked, because I don't think I've ever baked a pie."

My mother was very non-traditional in many ways. She attended college, graduating in 1946 with a mathematics and physics degree, a brilliant woman who could have done anything with her life if she had grown up in a different era. She married and moved to New England with my father, where she was turned down for jobs in her field. She ended up working in the accounting department for Mass Mutual Insurance and later did the bookkeeping for a business my father started. She always encouraged me to do whatever I wanted; I listened and received a Bachelor of Science in Electrical Engineering and worked in that field for 32 years before retiring to pursue my art full time.
My mother always took adversity in stride. I read once that people who grew up during the depression often have the strength to take whatever is thrown at them and move on; that describes my mother. She would have liked to have pursued a career using her education, but accepted the times weren't right and focused on family instead. When she got ill with breast cancer in her early 80's, she had surgery, snapped right back, and return to work as soon as the doctor allowed. Yes my mother was working in her 80s.

When she learned at 89 she had advanced cancer of the pancreas and that there was nothing they could do, she accepted her prognosis so naturally we wondered if she understood.  She did of course, but chose to leave this life as she had lived it, calmly and with style. 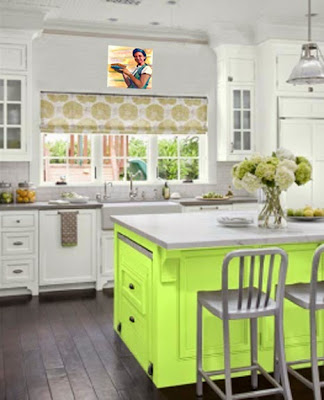 Since this painting is so meaningful for me, it will not be for sale during the exhibition. However, I wanted to support the Cancer Resource Center so I ask for permission to sell prints of Pie Anyone? at the Columbia Art Center during the exhibition. The prints are 10" X 10" on a gallery wrapped canvas. I think this print would look great in a kitchen. Because the photograph was taken in the era as the Rosy the Riveter posters, I decided to use a similar color scheme.


Copyright April M Rimpo All Rights Reserved. You may share my work with attribution and a link to this source site, but all other uses are prohibited.
at 4/03/2015